Over 50 Years of working with Churches

Arrange a personal visit from us in your Church contact us now! 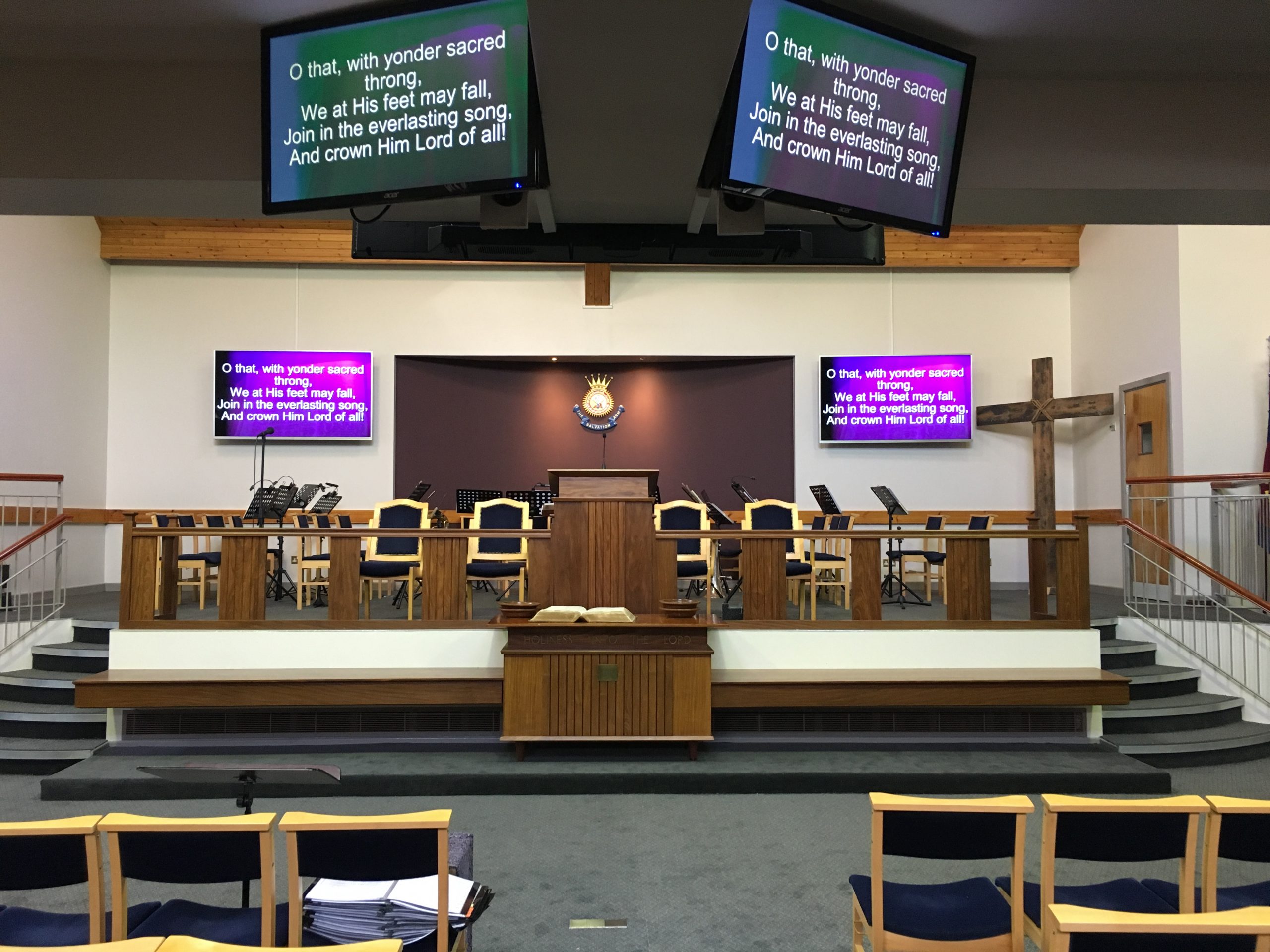 We take time in each and every Church to provide you with the right equipment to meet your requirements.  We distribute multiple brands with a vast array of product, therefore we are able to provide the right solution uniquely for your Church.

Every Church is unique and we spend time with you and discuss options for you, we then present these providing you with all the information to allow for an informed decision.  This includes a projector, control, displays and wiring.

A very hot topic in present days.  We have a vast knowledge of streaming options, utilising reliable easy to use the equipment.  From simply fixed cameras to multiple 4k video capture, processing and output we can provide a solution that is tailored for your Church.

We provide an interior LED architectural or Worship area lighting solution.  Using a host of leading, trusted manufacturers we are able to provide simple static or colour changing for ceilings, windows and platforms with simple push button recall or full lighting control.

A small selection of contracts we have recently completed, ranging from simple straight forward sound systems to fully

Considerable audio and visual upgrade in Ballynure Presbyterian Church. The AV install allowed for a new Audio system, with a digital console, new projection equipment and the introduction of 3 full HD PTZ cameras.

Following a thorough look at available suppliers, Ballynure Presbyterian Church opted to award Rea Sound this fantastic contract. The Church felt the need to upgrade the existing equipment to allow for a better experience in Church and for those who are not able to join with them and stay at home. The new system allows for live streaming of the service for those members and adherents to still be part of the service. Live Streaming to the halls, creche and foyer were also incorporated. By taking time, listening to the needs Rea Sound was able to provide exactly what was needed with the financial budget available. 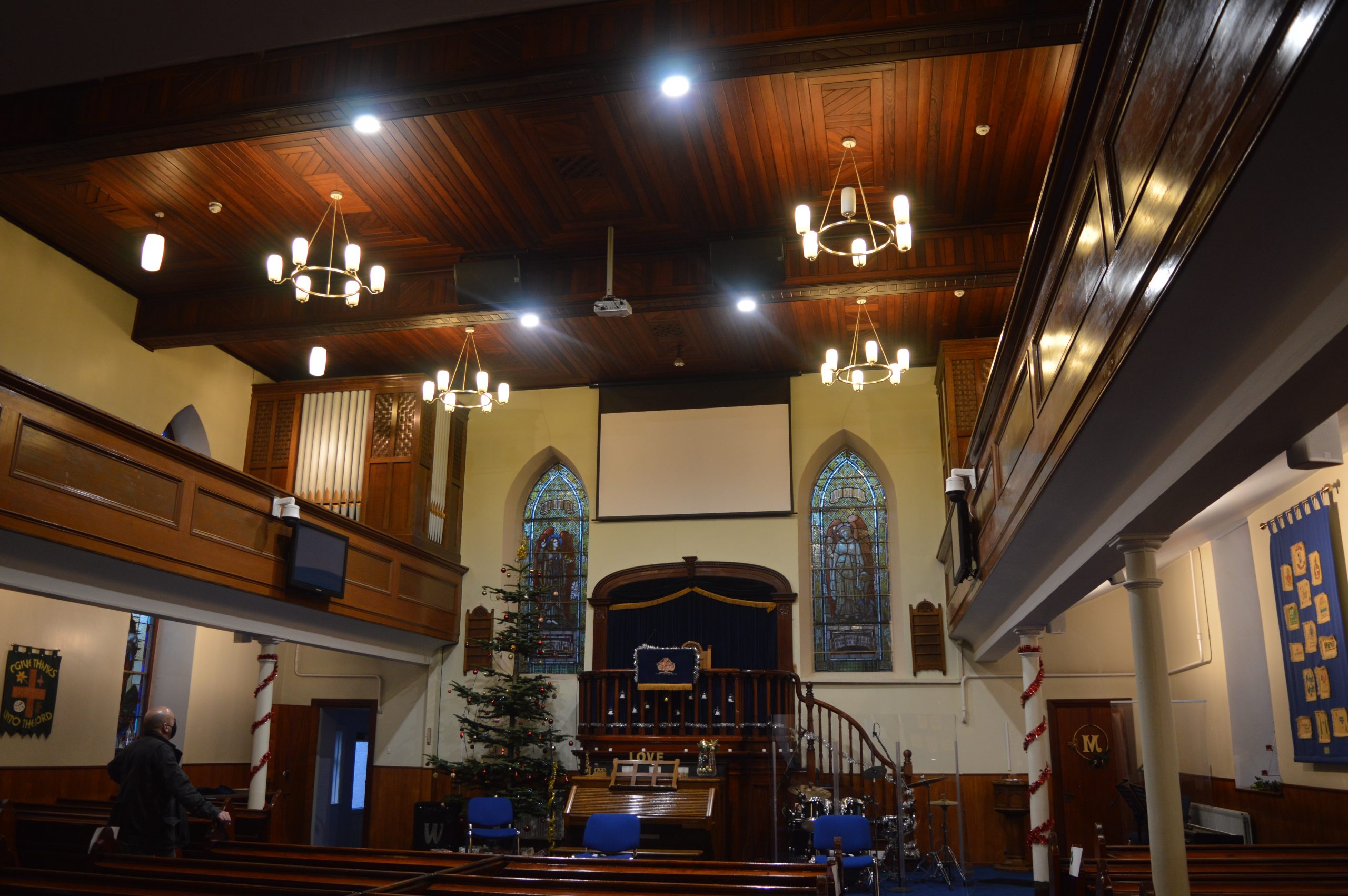 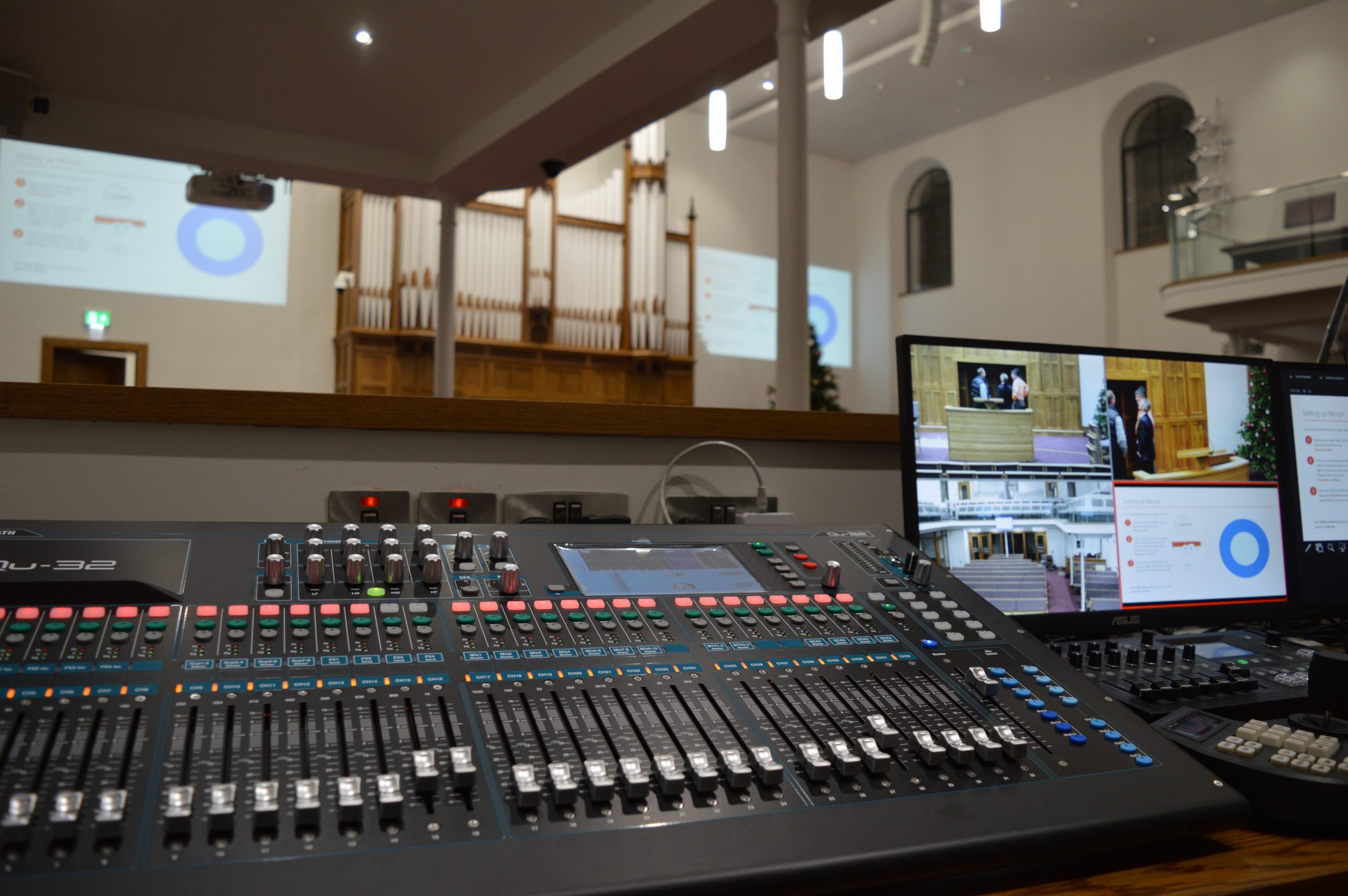 A complete interior fit-out was undertaken by the Church, stripping back to the bare brick.  The end result was stunning.

We were very pleased to work with the Church AV committee, a team that had thought through all aspects of their technical needs.
Rea Sound came in and discussed these needs with them, we visited another Church to help visualise and hear the proposed speaker system and provided a solution. The audio is based on the Martin Audio Omniline speaker array, providing clarity throughout the Church. The Church opted for the Allen & Heath QU Console, one of the easiest to use and set up the digital console on the market. Two projectors and under-balcony screens provide for Easyworship software and the three cameras as required on these displays.

Holy Trinity was being re-fitted, sandblasted, re-painted – a whole makeover. As part of this, the design team and Church requested a new sound system be installed in keeping with the “makeover”.

The sound system needed to be discrete, yet powerful enough to cover all areas of the Church. With this in mind, we provided a tender for the Martin Audio Omniline range and were pleased, after demonstrations, to be awarded the contract. The digital matrix housed within the Vestry allows for easy and automatic control of levels and microphones. The visual system consists of 10x 32” LCD screens located on the main pillars of the church, as per the specification. These screens can show live images from any of the cameras or material from a computer/laptop. 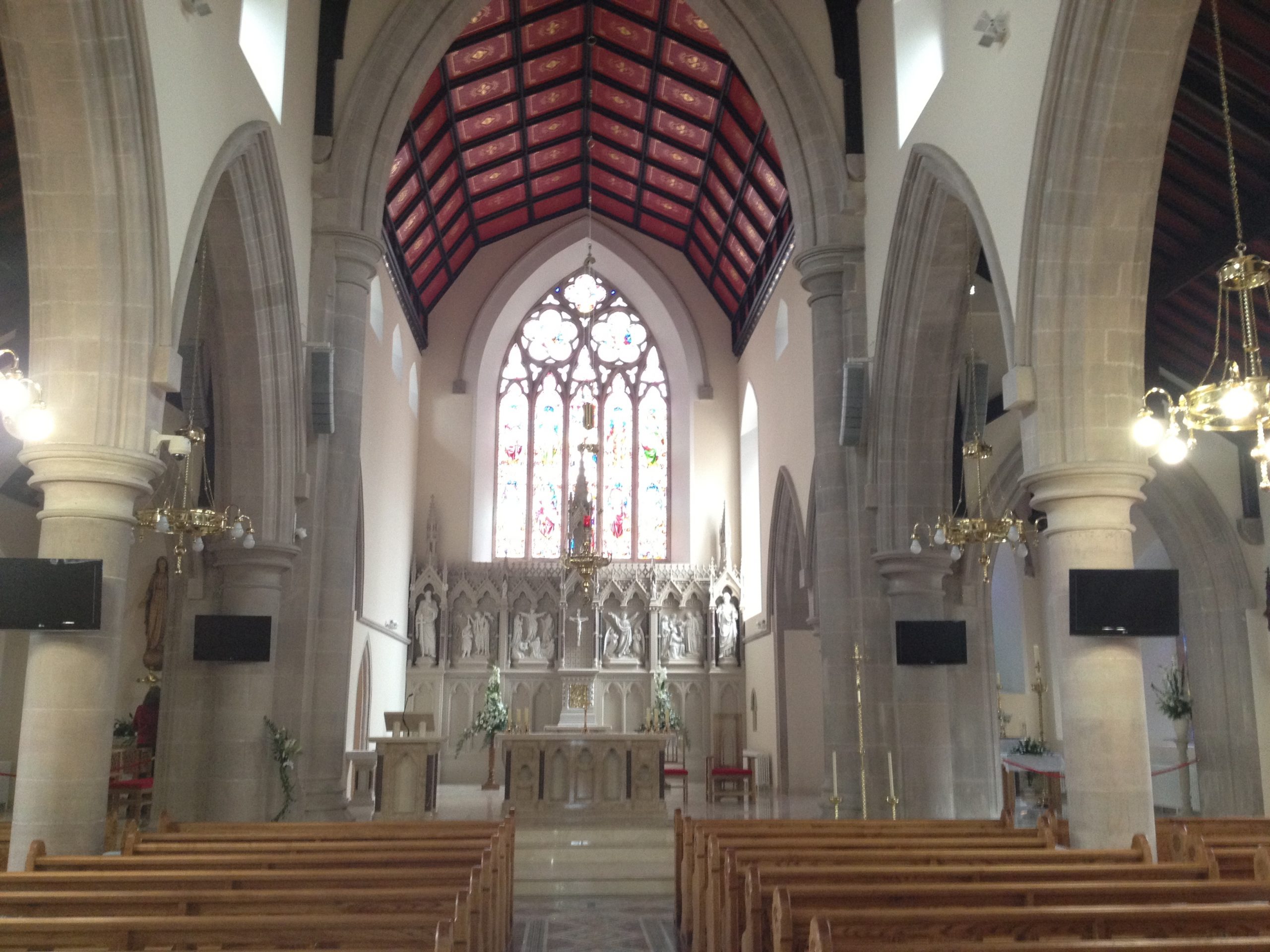 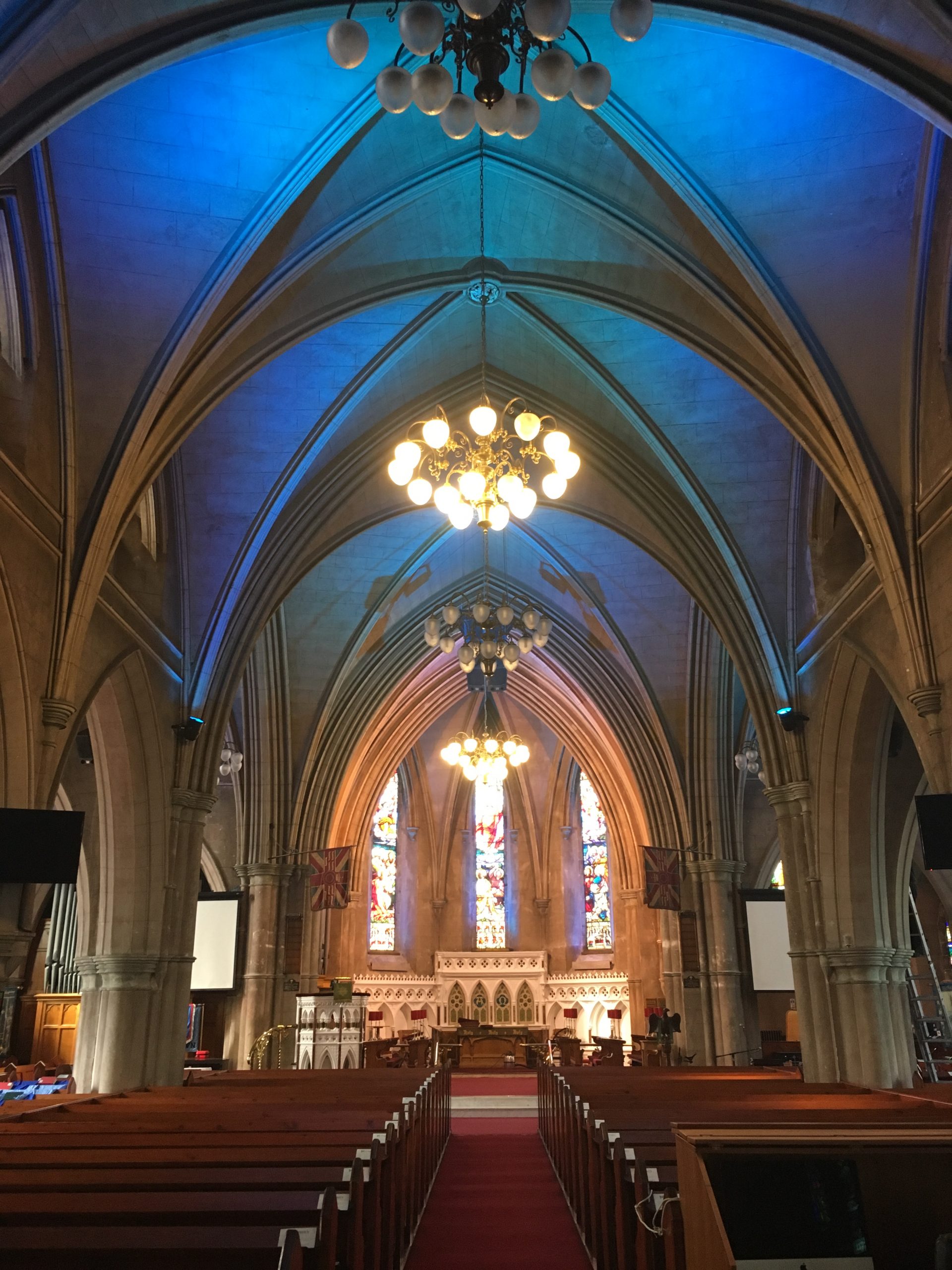 Situated in the heart of Portadown, St Marks is a stunning Church building, with beautiful architectural features including vaulted ceilings.  As part of the fit out we were able to provide a discrete LED lighting solution to bring these wonderful features to life.  This compliments the the new PTZ camera and visual solution installed.  With a new projection system and reference monitors, every seat in the Church has sight of a display for complete participation in the service.  The two cameras cover all that is happened from the Communion table, Pulpit, Reading Desks, Praise group and main front doors.

The audio system was upgraded to a fully digital solution offering complete control for both live Church use and separate live stream mixes.  A digital monitoring system for the praise group allows them to select their own sources and mix and set volumes themselves, helping the whole audio and praise group to work better together.

After two years of research – visiting trade shows and suppliers, reading specifications and reviews, and listening to systems – it was going to take something special in a speaker system to please the church’s technical team; and they found what they wanted in Martin Audio’s award-winning MLA platform.

The requirement had been for a complete replacement of the PA system in the 600-capacity church. According to Rea Sound’s account manager, Roger McMullan. ‘Shifting emphasis to modern worship music meant that the old system, which was 20 years old, could no longer cope.’

Its replacement needed to provide not only excellent speech reproduction, but also a wide range of music – from classical instruments to rock bands, soloists to choirs – and also be aesthetically discreet. The acoustic environment in itself was challenging – a wide asymmetrical building with a relatively shallow seated area, and a gallery with a low roof, coupled with a high clerestory, all contributing to a fairly reverberant, boomy listening space. Furthermore, there were few choices for speaker locations.

However, the church’s AV team admits that its path to MLA had come about almost by accident. Visiting Rea Sound primarily to discuss mixers, they auditioned MLA and other speakers while they were there. What they heard surprised them. ‘We didn’t really expect that a system as small as MLA Mini would produce the sound that they did, and we left the showroom determined to hear them in our own premises,’ said one of the team leaders, Brian Adams.

Determined to hear the speakers as they would be installed, the AV team built a temporary rigging system, and spent a full day listening to the MLA’s and one other shortlisted system. At the end of this process, the team came down unanimously in favour of the MLA Mini.

Restricted ceiling height meant limiting the hangs to four elements per side. ‘But in any case, software modelling demonstrated that this would provide near perfect coverage,’ said Roger McMullan. Since head height at the rear of the gallery is above the highest hanging point at the front of the church, Martin Audio DD6’s have been used as fills in the upstairs gallery.

The church did however, depart from the normal installation methods for MLA Mini – partly due to aesthetic requirements, and partly due to physical constraints. With this limited headroom, flying the subs along with the Line Array was never an option, and although a variety of solutions were considered, in the final analysis the existing subs (situated below the floor) fitted perfectly, and have more than enough power handling to complement the MLA Mini.

This did lead to a new problem however – where to locate the amps, which normally reside in the rear of the MSX Power Plant. Fortunately adapting the amps to fit in a 19′ rack was an easy option – unusually the team decided to mount them in the back of the rack, behind other shallow depth equipment, rather than use up valuable space at the front of the rack, which is located in a room beside the main church sanctuary.

Installation was carried out by the in-house team, but only after one of them spent a considerable time with Rea Sound working on Martin Audio’s Display software to determine the optimum position. ‘We were quite surprised to find just how little movement in the speaker location made a very big difference in the predicted coverage of the audience area – fortunately Display let us try various positions in advance of installation, and determine within millimetres, where they should be hung! There was a temptation to simply hang the new speakers at the same point as the old ones, which would have been much more convenient – the time spent with Display demonstrated however that this would have been a mistake, so we moved the hanging points – albeit by only 500mm!’ Via Display they also managed to ‘hard avoid’ the gallery fascia which would have caused unwanted slapback.

Fortunately the High Kirk team has an established track record for ‘getting it right’, and they were not disappointed. ‘After two years of research, and several weeks of installation work, we knew we had finally made it on the first Sunday; the sound was excellent and we didn’t need to try any other [Martin Audio]  VU-NET settings other than the original, ‘ said Adams.

‘The system is everything we could have expected and more,’ he added. Speech has brilliant clarity, both with lectern and radio mics, and music – there really is no noticeable difference from the front to the back of the listening area.

‘Our mix position is at the back under the front edge of the gallery – far from ideal, but the MLA Mini has such precise cut-off that it presents no problems – a few steps back behind the desk, and levels drop off dramatically, just as Display predicted! At the front, it’s the same story – the first row of seats hears the PA perfectly, yet we can use lapel radio mics only a few metres in front of this position.’

In conclusion, Brian Adams confirms that everyone is delighted with the implementation. ‘Undoubtedly our decision to go with the MLA Mini was made so much easier because of the co-operation we received from Rea Sound, who were clearly committed to making sure we made the right choice; we would be happy to recommend both Rea Sound and MLA to any church in a similar position to ourselves!‘ 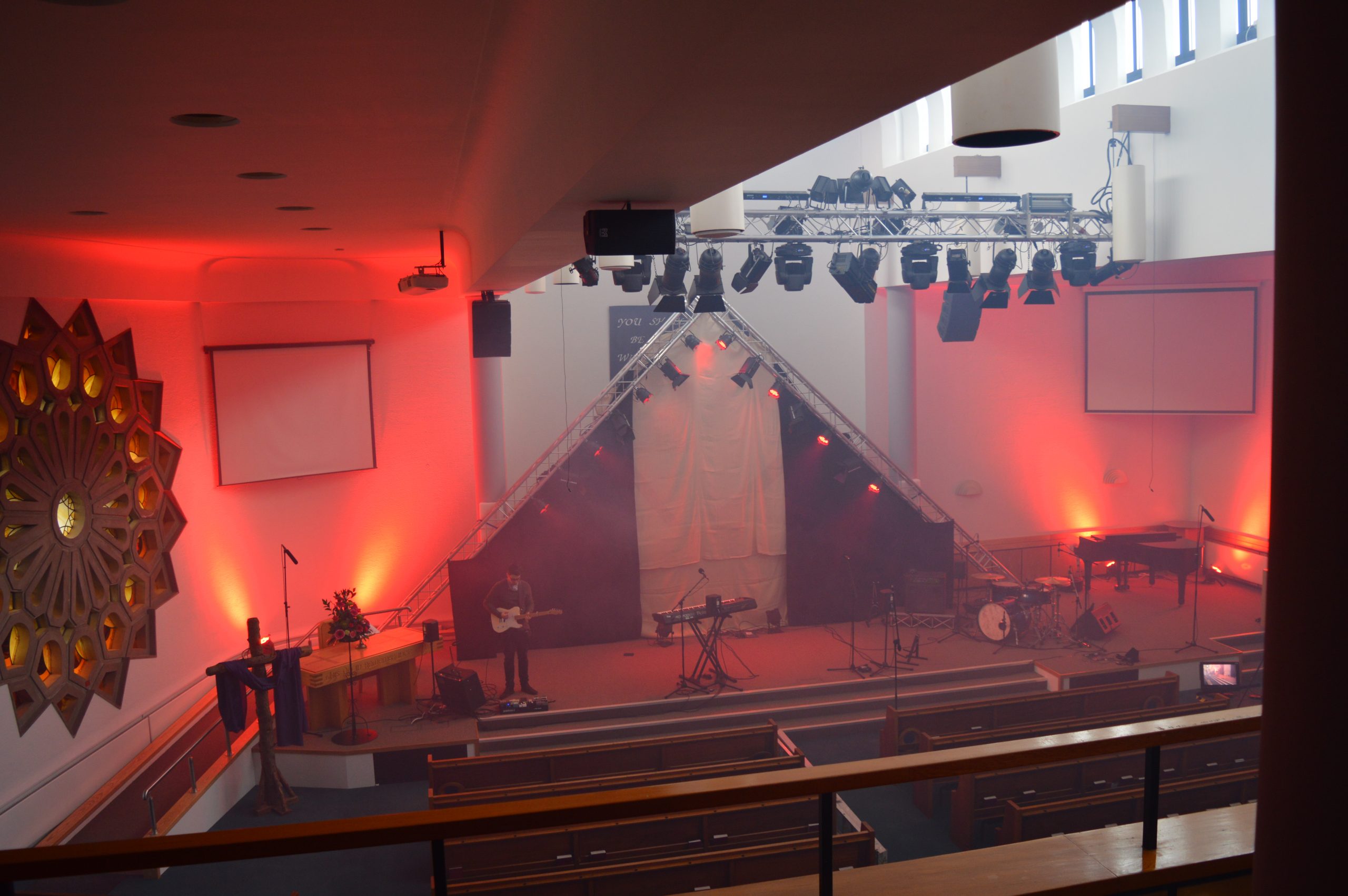 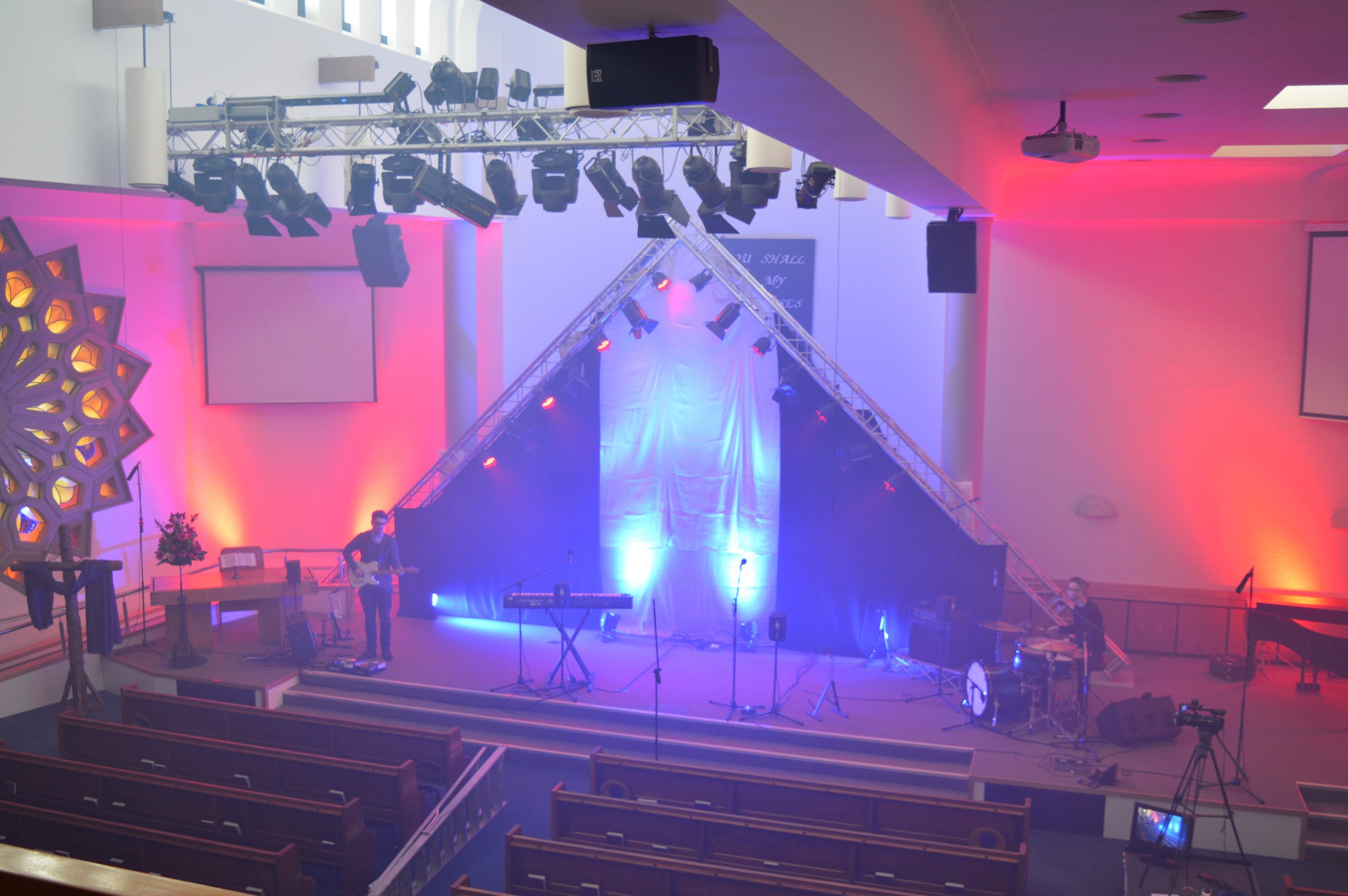 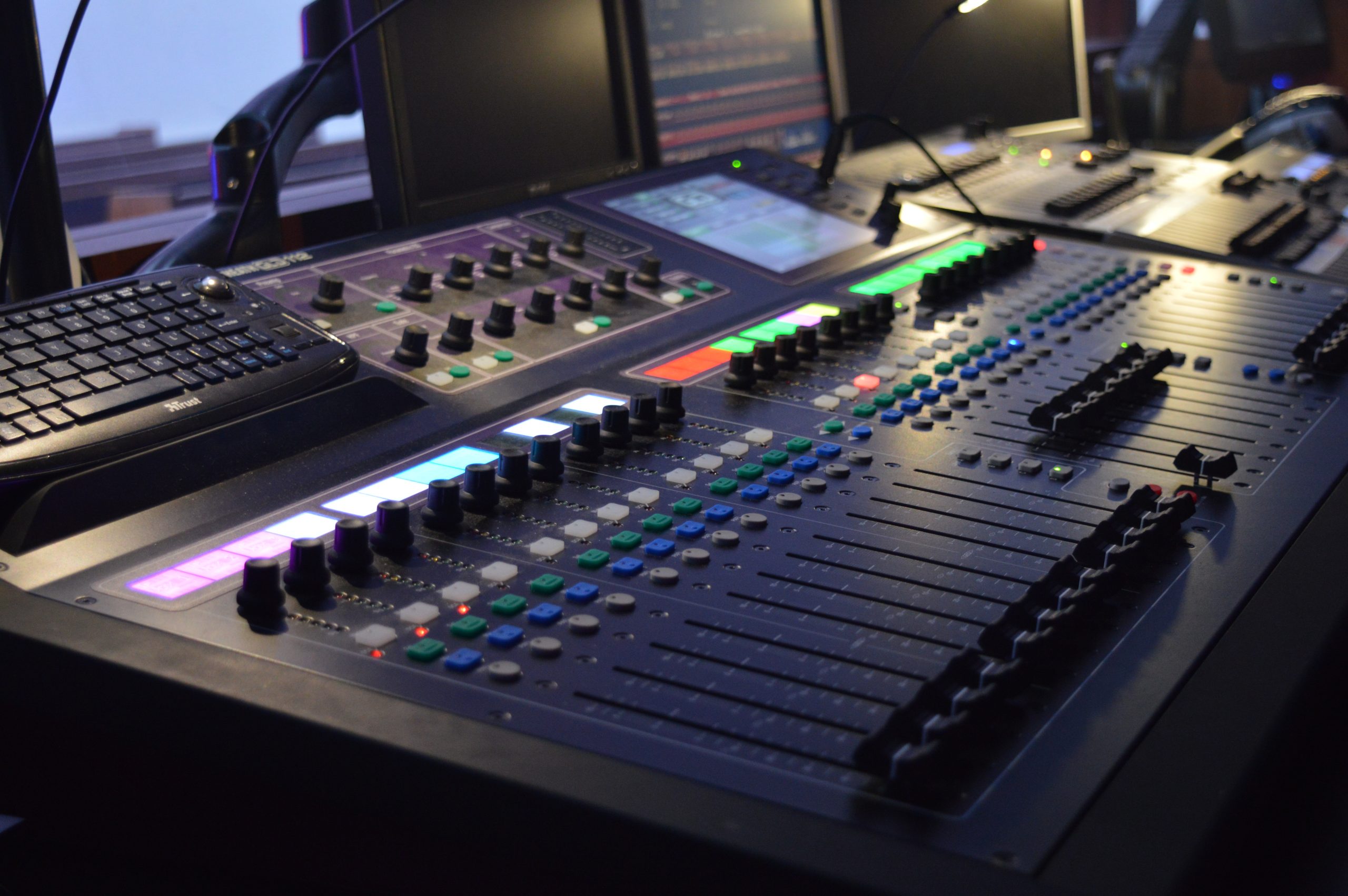 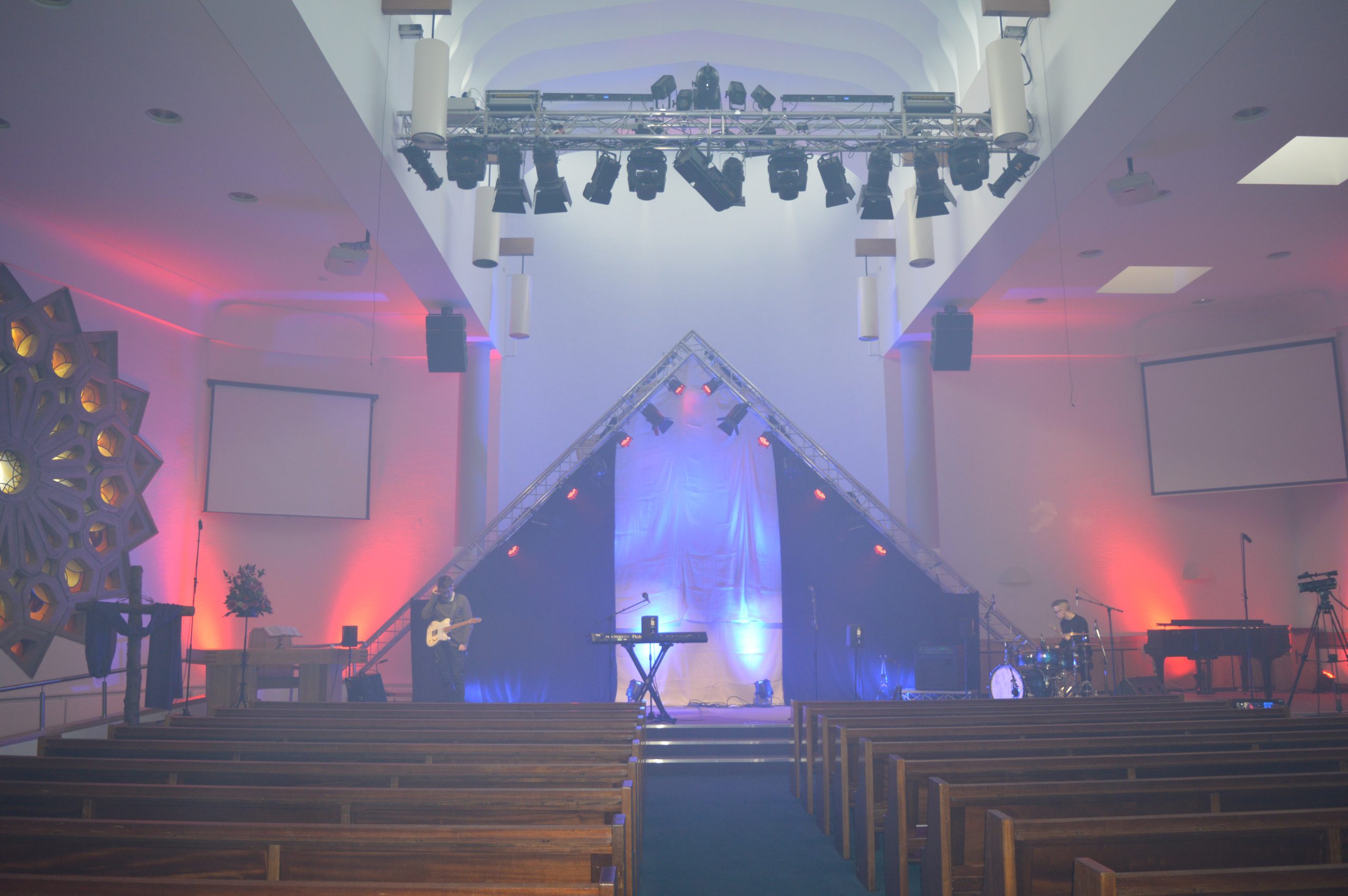